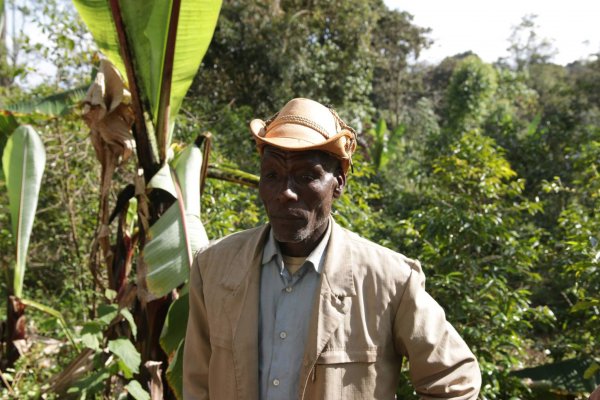 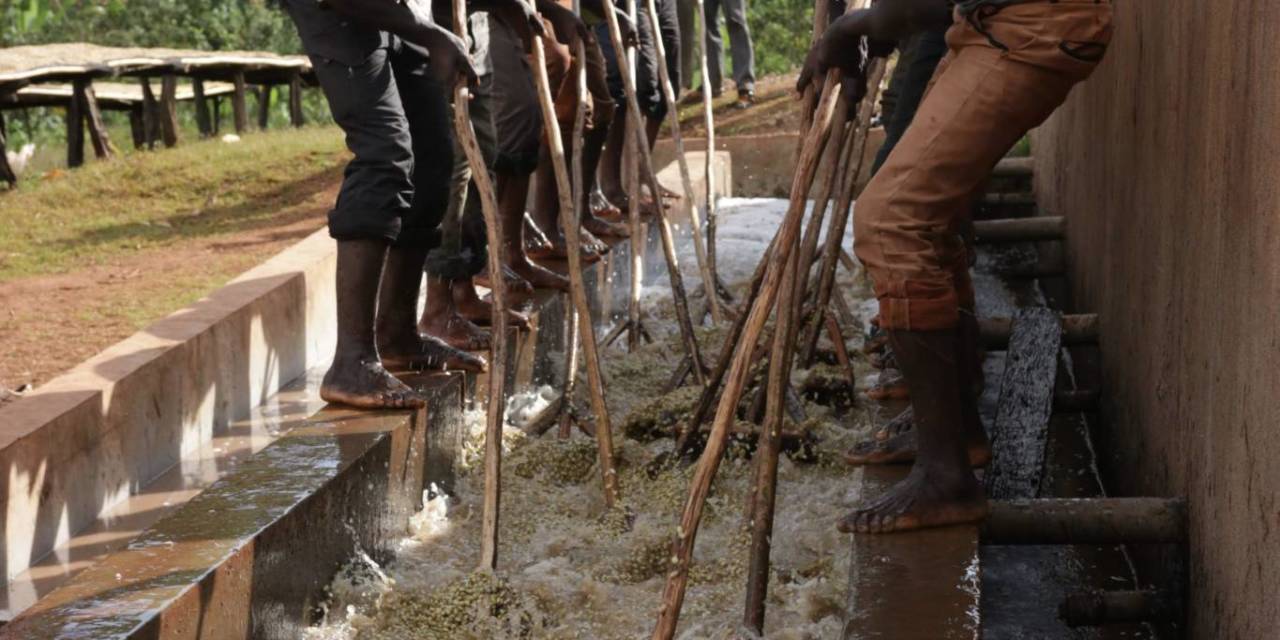 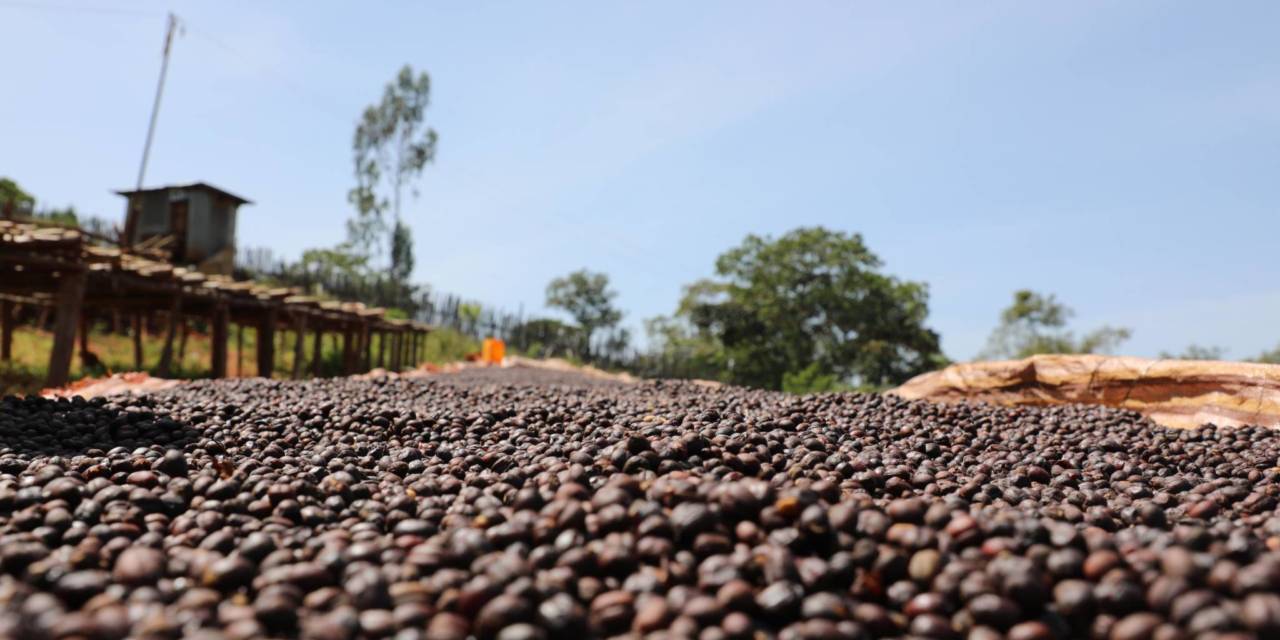 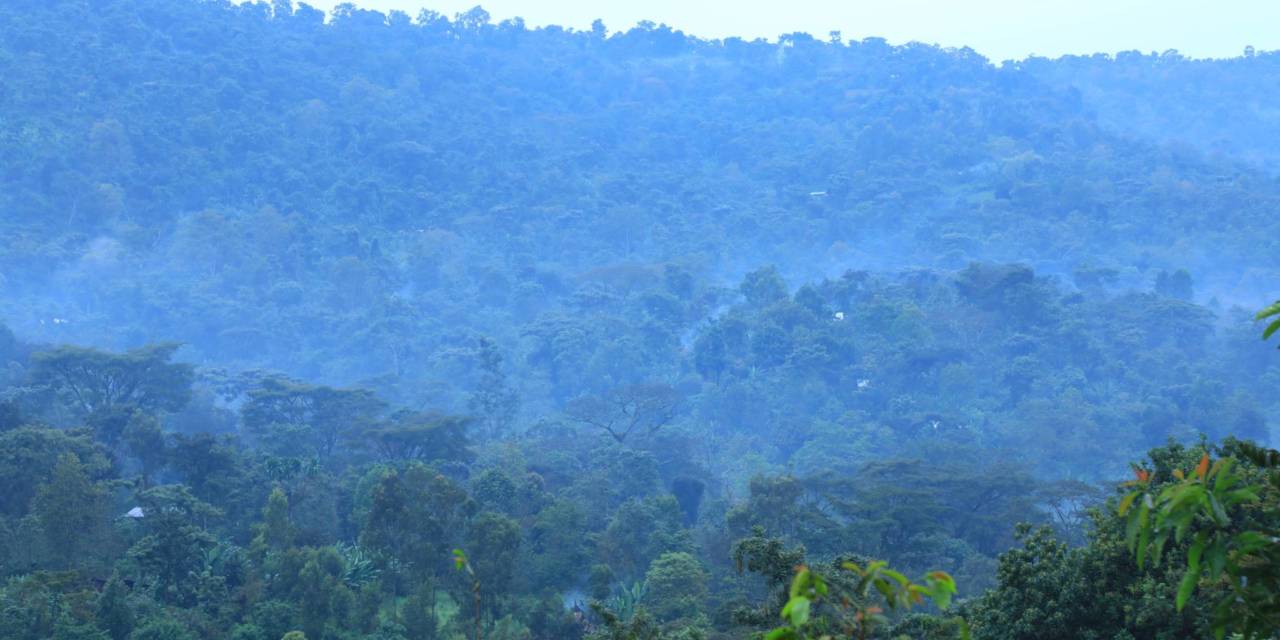 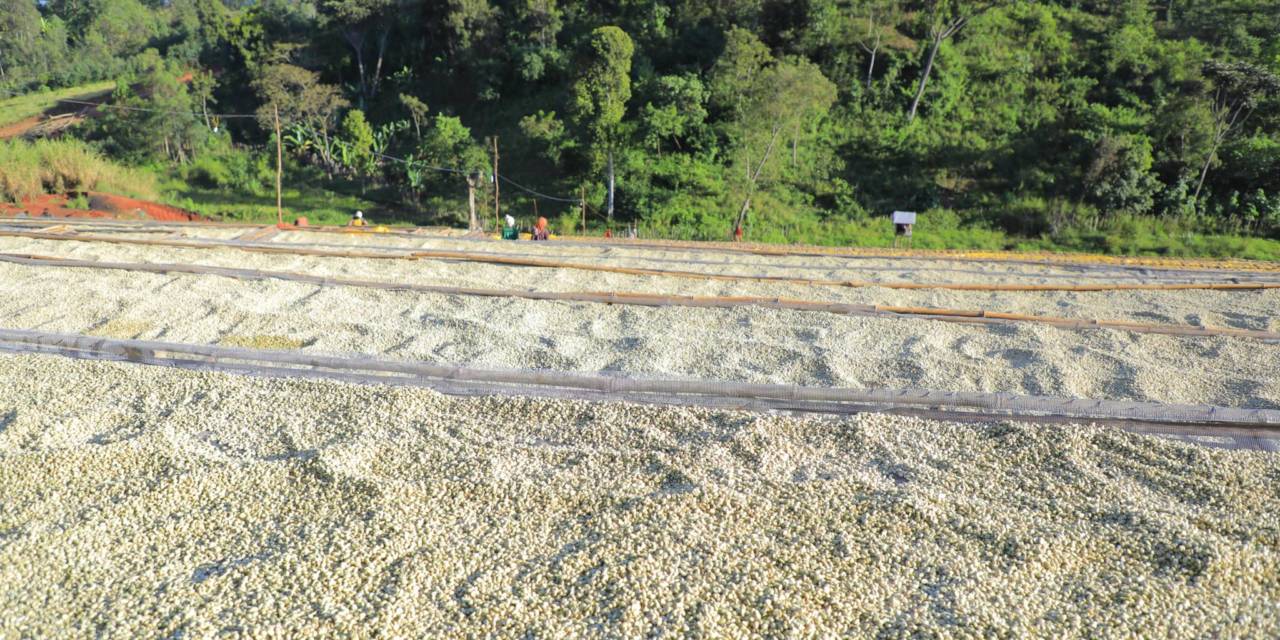 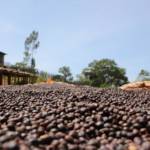 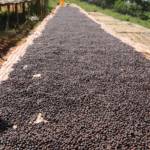 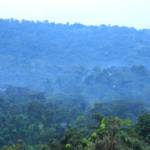 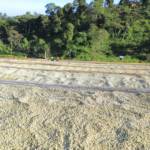 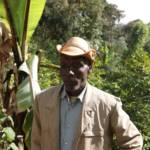 Egu Abaya is the name of this washing station. It’s one out of three primary washings tations we buy from in the same area. The altitudes are great, and the coffees from this area have always been distinct and attractive to us. It is privately owned in Guji, close to the town of Bule Hora. They do both washed and naturals. The producer is also investing in a local school for the community nearby, in Kilenso Mokonesa. They are collecting and buying cherries from various smallholders in the area. Besides producing stand out coffees they are certified Rainforest Alliance. The farmers delivering cherries are registered and entitled to second payments and premiums and have farmer training program on composting, pruning and mulching etc for increased quality and yield. Its relatively cold due to high elevation, and both maturation, fermentation and drying goes slowly. They do traditional wet fermentation, grading in channels by water and drying on raised beds the coffee is standing out with a lot of uniqueness and character.

Privately owned communal wetmill in Egu Abaye area of Guji – by Israel Degfa. He owns 26 washing stations and a farm, across the South and South West of Ethiopia.

Many of Israel’s washing stations are great just because of the location and altitude etc, but he is also investing in better systems and protocols in many of them. We are also buying improved naturals, honey coffees, and shade dried coffees from these washing stations.

Every day of production they are differentiating what goes in to the improved and better qualities (grade 1) from what’s a normal preparation for grade 2 and grade 3s. He has invested in flotations systems for cherries and systematically separate some of the coffees for better performance on site. These coffees are taken better care of by an assigned quality team. They generally do lot separation based on 150 bags of parchment, equal to 100 bags of greens. But they often do smaller lot sizes as well when they do honey, shade or other improved preparations.

Even if Israel is a producer of big volumes he started in 2014 to work on the quality of processing across his washing stations as priority. It was this shift in focus that caused Israel to look for different ways to produce and market his coffees, ways that would facilitate and value his new emphasis on quality. It was from this point that we began to work with Israel, visiting his washing stations and learning about his business, we also began to know him through this process. Through this relationship we have been able to cup through coffees processed by Israel’s washing stations with him in our lab in Addis, and with the team back here in Oslo and share what we value in the cup and the kind of profiles we are looking for. He has also given us a lot of scope to access his coffees and take sample material for assessment, as well as permitting our specific instructions on both processing at the washingstations and the milling prep for the lots we purchased from him.

Israel Degfa is a young business man in Ethiopia with a sure and steady focus. In previous years the production at these washing stations has been focused on volume. This was also related to the previous lack of traceability when the producers were forced to sell their coffees through the commodity exchange. But over the last years Israel has shifted his focus, waiting for a political shift allowing producers sell directly to importers like Nordic. And finally in 2017 it all got liberalized.

From this year on he completely manages the supply chain and trace ability. The coffees are separated according to the days and areas of harvest as well as by preparation. The premium coffees for direct sales sits in the warehouses at the washing stations until he decide to move it to Addis. The coffee truck have to pass through a local ECX facility where they draw a sample and the quality is verified in the ECX lab and the coffee get an official grade, like Q 1 (grade 1). When approved the truck can move on to Addis.

Israel have invested in a great and modern warehouse and dry mill in Addis. They have separate areas for washed and naturals as well as for speciality and for the normal commodity. He have invested in very high tech color sorters as well as a quality lab. As soon as the coffee gets to Addis, or if we need samples to take buying decisions we communicate closely and directely with the quality team, and can draw samples our selves in the warehouse. The samples will be brought to our own lab in Addis for cupping and quality measures.

As soon as a sample or contract is approved Israel allow us to be in the warehouse while coffees are dry milled, graded and bagged, and we can immediately draw another pre shipment sample for approval.

At the washing stations

On average farmers are having a farm size of less than 1 hectares. Most coffees are organic by default. Organic compost is common, pruning less common. A farmer can typically have less than 1500 trees pr hectar, and 1 tree is typically producing cherries equal to less than 100 – 200 grams of green coffee.

A mix of local improved variety’s like Certo and local Wolisho . Such as native coffee of forest origin transferred to family smallholder plots. The varieties are referred to collectively as Ethiopian Heirloom, which is a myriad of local native Typica hybrids and new improved varietals based on the old strains.

Producing great natural coffees is challenging and it requires at least as much attention to details as producing good washed coffees. Israel have programs with the farmers and producer groups to increase cherry quality for the naturals, as well as he have invested in flotation systems for separation before it goes in to production.

Naturals is all about the cherry quality, sorting and grading and the drying procedure in combination with the day to day climate.

For he’s premium naturals Israel is targeting the highest quality grades there is. The cherries are hand sorted for un-ripe and over ripe cherries to get a sweeter and cleaner product. Even if it is not always the case the Natural coffee is often processed at the later part of the harvest and that’s when the harvest is peaking at the higher altitudes.

The coffees are dried on raised african drying beds. Drying takes 12-20 days depending on the weather. They have a trained quality team at the site specialized in handling the naturals. The first phase of drying is crucial and are done in relatively thin layers on the tables to avoid fermented flavors and if it goes as planned it should reach what’s called the “raisin” stage at about 25% humidity in a few days. It’s important to move the cherries carefully to avoid damage on the fruit. At this stage the coffees are constantly sorted for lower quality cherries.

In the second phase, from 25% – 10% moist, the layers are built up, and it’s constantly moved during daytime, and needs some rest mid day and at night. An uncontrolled drying sequence can increase the very fruity and fermenty flavors and make it unstable, and if to slow it can create mold and other off flavors. It’s a costly process that requires good labor and attention if you want it at the highest quality levels. Coffees are covered in shade nets during midday and in plastic cover at night.

Washed and graded in channels: Yes

Soaking: about 6 Hours in clean water.

Whole ripe cherries are hand sorted for unripes and overripes by the farmers before they go into production. They are pulped by a disk pulper and graded in to 1st and 2nd quality in the pulpers density channels. The parchment is then fermented under water for about 48 hours, depending on the weather conditions. After which graded in the washing channels by water flow that again separates the coffee by density. Its then soaked 6 – 24 hrs in fresh, clean water before it’s moved to the drying tables

The parchments is dried in the sun for about 12 – 15 days, depending on the weather conditions, on raised African drying beds. For the premium grades they will continuously sort the parchment at the drying tables. Coffees are covered in shade nets during midday and at night. 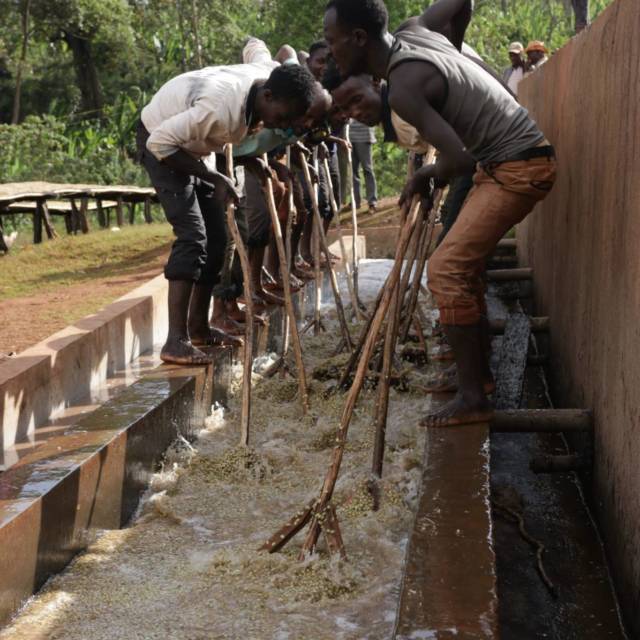 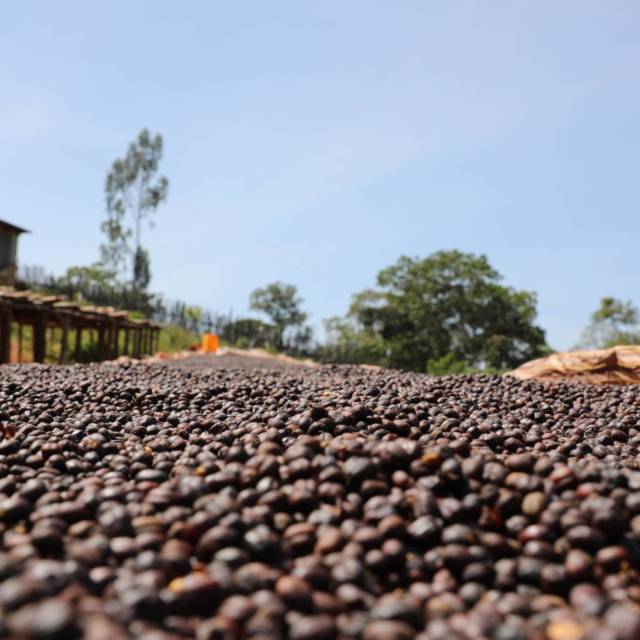 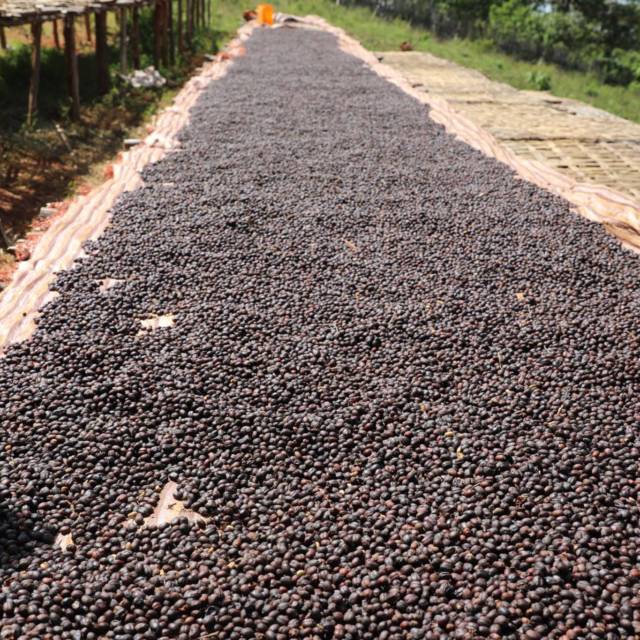 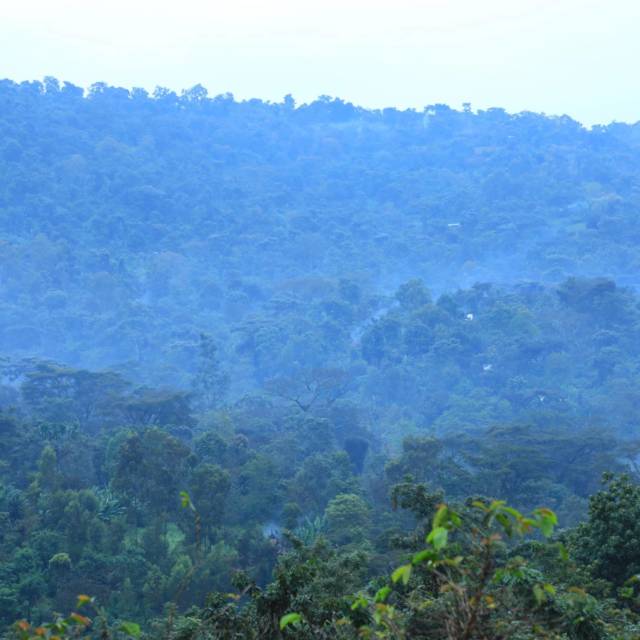 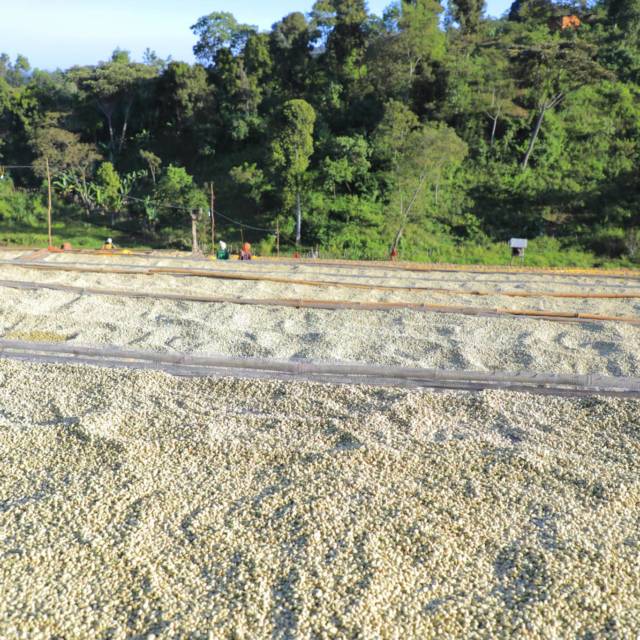 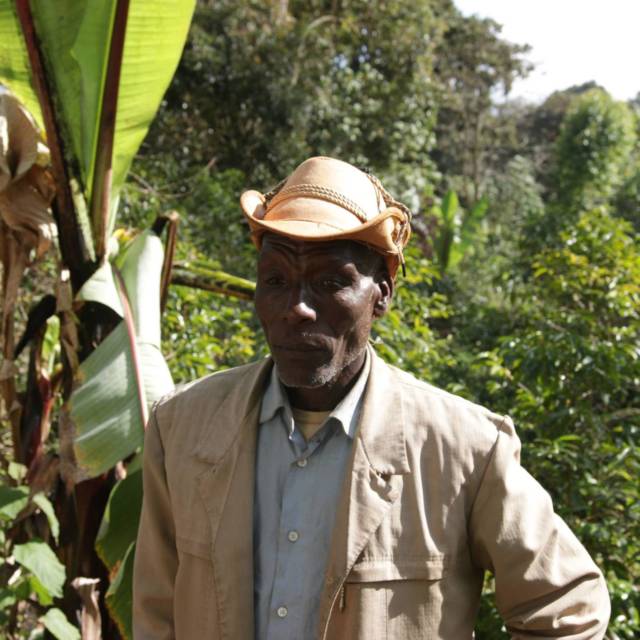