Tsegaye Hagos was born in the Atsbi Wonberta woreda, between the famous rock-hewn churches of Tigray. Tigray, one of Ethiopia’s nine states, is found in the North dry and scorched lands that border Eritrea. The majority of Tigrayans are Orthodox Christian and have built their lives around religious concepts, like strict fasting, for instance. Tsegaye still considers these Northern areas as home.

Tsegaye, born in 1959, loses his parents at a young age. His older brothers and sisters take care of Tsegaye. Together, they practically raise him. Coffee has an important role in Tsegaye’s early life. The young Tigrayen even thinks about working in coffee; although the North is not suitable for quality coffee. At age 18, Tsegaye immigrates to Sudan because the political situation in Ethiopia is unstable. Like many youths in that time, he flees to a neighboring country and searches for a better future.

After 15 years in Sudan, Tsegaye returns to his birth grounds. He is involved in the import business of vehicles from the U.A.E. But the love for coffee never strays far from his mind. In 1996, a group of people start a joint venture that supplies the local market with coffee. Tsegaye joins the venture and starts his coffee career; a dream come true. However, Tsegaye is ambitious and interested in starting his own coffee company.

After visiting Guji, he considers striking down in the Kercha District, Guji zone. Kercha is an area that borders Gedeo’s fruitful woreda ‘Gedeb’. Just 10 years after joining the venture, Tsgaye opens his own washing station in Kercha; Sasaba. The work at Sasaba proves to be intensive and Tsegaye is in dire need of assistance. Tsegaye’s fellow Tigrayen and childhood friend Mulu Gebreyohannes joins Sasaba as the Operation Manager.

The two make Sasaba a phenomenon in Guji. The success of Sasaba paves the road for a new washing station; Ye Genet.

About Ye Genet and Trabocca

For the past six years, we have been working alongside Mr. Tsegaye Hagos. Tsegaye is known for being one of the most consistent people in producing high-quality Guji’s. We witness this through the Sasaba coffees. Both washed and naturals bring the best Kercha has to offer. The idea to open Ye Genet washing station did not take root in personal ambition, but rather in the migration of Gedeo people; from Gedeo to Guji.

The Gedeo’s have a land shortage. A great number of smallholders left their homes and settled in Guji, including the Kercha and Hambela Wamena woreda’s. Both area’s offer far more space than the overcrowded Gedeo zone. Tsegaye finds out that these migrants have coffee growing experience and attracts the best among them to deliver cherries at Ye Genet. These Gedeo’s are the workforce behind Ye Genet.

The farmers are consistent in picking fully ripe cherries; a practice our agronomist has never seen elsewhere in Ethiopia. Farmers work with the same varieties and use a systematic farming system to produce more uniform beans. The conditions in the surrounding area are also excellent. Fertile red-brown soil that is rich in iron. Young and vital coffee trees. And astonishing altitudes that surpass 2000 m.a.s.l.

Tsegaye gives the smallholders financial incentives to deliver good cherries. On top of that, he initiates social projects to improve conditions in the area. For instance, the construction of a school building for the children of the coffee community. 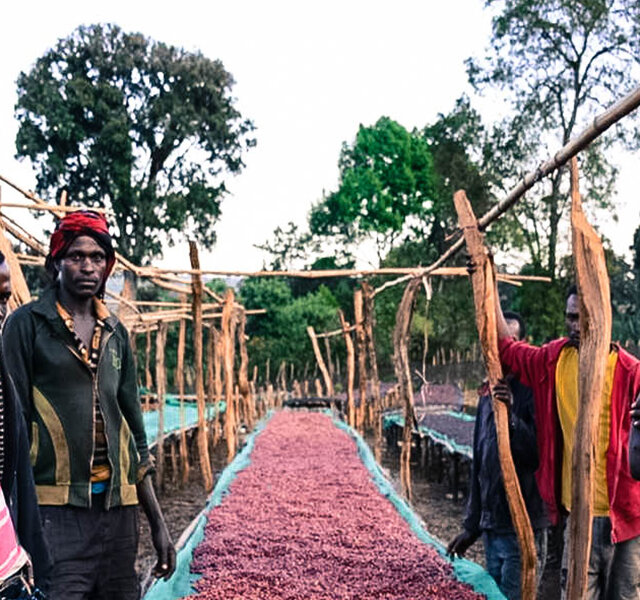