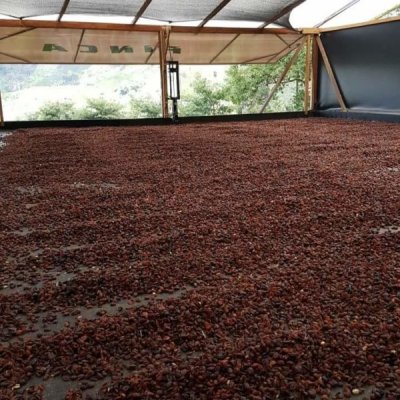 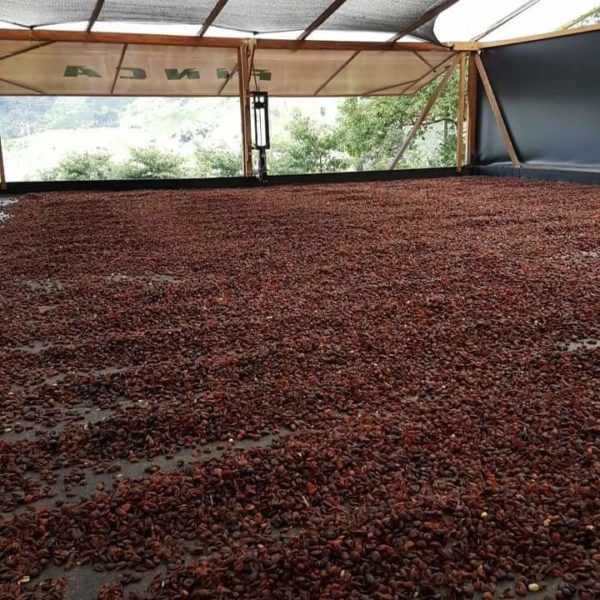 The finca Alcatraz is located in the municipality of Oparapa in the region of Huila, more specifically in the Vereda de Morelia. The farm is about 7,5 Hectares of which there are 5 Hectares of coffee production area. The rest is a nature reserve with forest area. At this moment the are cultivating about 4 coffee varieties: Typica, Red Bourbon, Geisha and Caturra. The altitude is about 1700-1800 masl with the lowest point at 1705 and the highest at 1859 masl. The Bourbon and Geisha is grown around 1750 mts in a soil that is called “Franco arenoso”, which is loam soil.

There is a strict selection for only mature cherries during the harvesting and immature, dry and green beans are avoided both during picking and the wet milling process. The cascara is only derived from the mature cherries. Once the pulping process is started, immediately, the husk is transferred to the raised drying tables.

So pre-dried on raised beds, after a couple of days it is transferred to the “Marquesinas”to finish drying. Once they are dried both the coffee and the husk are carried to manual cleaning process using a sieve. After Wilfred Ule carries out the process of tasting. The farm has a laboratory for cupping, and good options to deliver the product packed correctly for transport. This way they guarantee a hygienic process in which both coffee and cascara are treated is in the best way possible.

The family is made up of 4 people, Wilfreds and his wife Yubely Trujillo, plus the two children Juan Camilo Ule and Juan de Jesus Ule. Together they have been producing coffee for approximately 15 years, of which we have dedicated the last seven years to the production of high quality coffees.