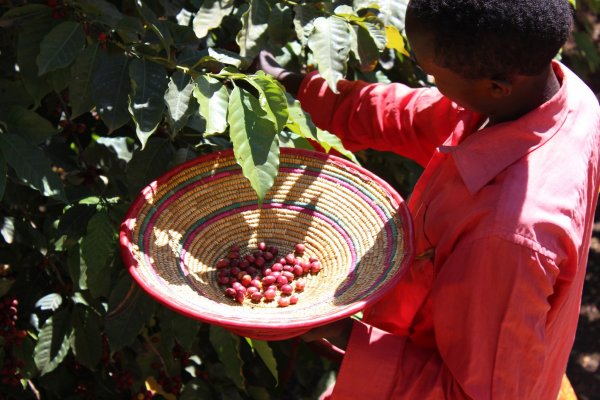 More than any other country, Ethiopia has a broad genetic diversity among its coffee varieties, with each type having distinctive taste, shape and colour. As a result, each region in the country can offer a different flavour profile, forming the grading system for Ethiopian coffees e.g. Sidamo, Harrar, Limu, Djimmah etc. Yirgacheffe is therefore both a town and grade of coffee in Ethiopia, and it is widely argued that a Yirgacheffe grade coffee offers one of the most distinctive flavour profiles in the world, with pungent floral aroma and intense citrus flavour.

The town itself is located in the Gedeo zone in the Southern Nations and Nationalities Peoples Regional State (SNNPRS) in Southern Ethiopia. Processing in Yirgacheffe can take the form of both washed and natural, with most of the coffee growing at over 2000 metres above sea level. Much of the coffee grown in Ethiopia is cultivated using traditional methods, under shade trees alongside other crops and without the use of chemicals. Coffee from Yirgacheffe is often referred to as ‘garden coffee’, as it is grown on very small plots, often in the back yard of small dwellings.

Working in partnership with Addis Exporter, a business with more than 100 years experience in exporting high quality coffee from Ethiopia, we have selected a natural processed coffee from smallholders based in Haricha Woreda, Yirgacheffe. It is the same region from which we source our much loved Rocko Mountain coffee. These smallholder farmers have hand-picked their cherries and sold them to a local trader who oversees the processing and sorting before selling the beans to the ECX who grade according to SCAA standards. Addis Exporter then purchase the top quality lots from the ECX and select the best for us to sample and select. As with our Rocko Mountain coffees in the past, we are including a donation to the Girls Gotta Run Foundation in the price paid for our Kana Yirgacheffe. GGRF is a non-profit organisation that empowers girls in Ethiopia through running and education in an effort to avoid early marriage and pregnancy. With athletic scholarship programs in Sodo and Bukoji – both situated within the greater Woreda zone, north of Yirgacheffe – GGRF is bringing positive impact to the lives of young women and their communities throughout Ethiopia.

This process was first discovered by a scientist called Kurt Zosel at the Max Planck Institute for Coal Research in 1967 as he was looking at new ways of separating mixtures of substances. In 1988, a German decaffeination company called CR3 developed this process for decaffeination whereby natural carbon dioxide (which comes from prehistoric underground lakes) is combined with water to create ‘subcritical’ conditions which creates a highly solvent substance for caffeine in coffee. It is a gentle, natural and organically certified process and the good caffeine selectivity of the carbon dioxide guarantees a high retention level of other coffee components which contribute to taste and aroma. The process is outlined below: The green beans enter a ‘pre-treatment’ vessel where they are cleaned and moistened with water before being brought into contact with pressurised liquid carbon dioxide. When the green coffee beans absorb the water, they expand and the pores are opened resulting in the caffeine molecules becoming mobile.

After the water has been added, the beans are then brought into contact with the pressurised liquid carbon dioxide which combines with the water to essentially form sparkling water. The carbon dioxide circulates through the beans and acts like a magnet, drawing out the mobile caffeine molecules.

The sparkling water then enters an evaporator which precipitates the caffeine rich carbon dioxide out of the water. The now caffeine free water is pumped back into the vessel for a new cycle.

This cycle is repeated until the required residual caffeine level is reached. Once this has happened, the circulation of carbon dioxide is stopped and the green beans are discharged into a drier.

The decaffeinated coffee is then gently dried until it reaches its original moisture content, after which it is ready for roasting.

There are several benefits to using this process for decaffeination:
The agent used for extracting the caffeine is entirely natural and the process can be classified as ‘organic’ due to the complete lack of chemicals used throughout. There is also no health risk by
consuming coffee that has been decaffeinated in this way.

The way the process works means the other compounds in the green bean are left untouched, meaning decaffeination has no effect on the flavour and aroma of the finished product. The carbon dioxide is very selective and doesn’t extract the carbohydrates and proteins in the green bean which contribute to flavour and smell.

The cell structure of the green bean and the finished roasted bean is unchanged which is of great advantage when working with speciality coffees.
The by-products are 100% natural and recyclable.