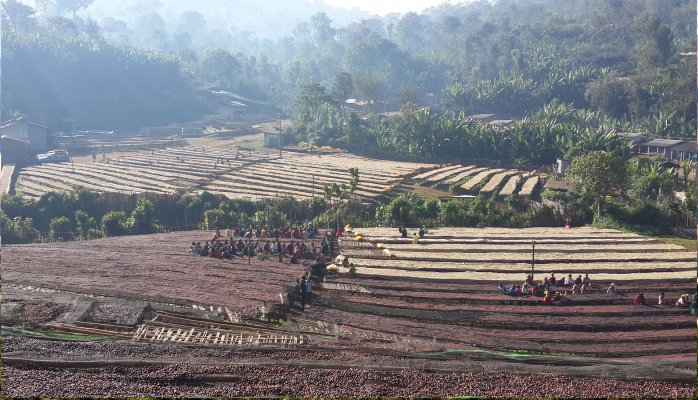 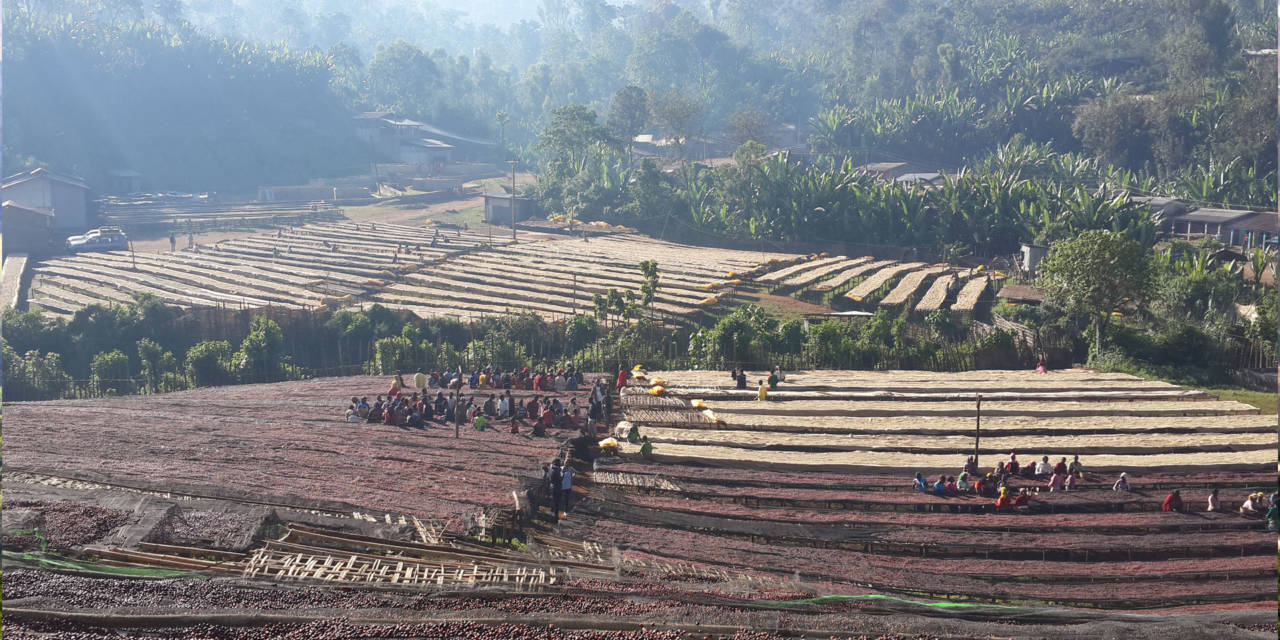 Uraga is both the name of the greater area and this specific washing station. Its located in the Sonkolle Kebele (village) in Guji. The Washing Station is located above 2000 masl, and the farms are located at even higher altitudes. There are a lot of new plantings in the area and even though the process here is traditional, with wet fermentation, grading in channels by water and drying on raised beds, the coffee is shining with unique character.

Uraga Washing Station took us by surprise a few years ago with truly unique flavor attributes. It’s part of our premium program in Ethiopia for several reasons. Firstly, the location is fantastic in terms of access to quality cherries. It is located in a remote area that is hard to access, and just getting coffees out of there is a challenge. Due to the high altitudes they were harvesting and producing coffee in the area until February, whilst most other places end the season in December. We believe that the altitude and the cold nights have an impact on both maturation of the cherries and the fermentation and drying.

Secondly, the management is really strong and they put a lot of pride and effort in to producing outstanding coffees. Even though it’s a relatively new washing station, they are producing great volumes. They have a high percentage of Grade 1 coffees, both Naturals and Washed compared to other washing stations. The cherries are brought by surrounding farmers who either deliver cherries directly to the washing station, or to a Uraga collection centre in the more remote areas. Farmers are immediately paid a small premium for higher quality cherries/pickings, and most farmers here are registered for a second payment after the coffee is sold with a quality premium. They produce greater volumes of Washed coffees the first part of the harvest, and Naturals in the later part of the harvest.

Every day of production they differentiate what goes in to the improved and better quality lots (Grade 1) from the normal preparation for Grade 2 and Grade 3.

About thousand smallholder farmers deliver small quantities of cherries on a daily basis to the communal washing station, or to collection centers in the nearby villages. The average farm size for producers delivering to the Uraga washing station is 2 – 3 hectares, which is larger than the average farm in Ethiopia. These semi-forest farms have red clay soil and coffee grows amongst Kerero, Tikur Enchet, Besena and Berbera tree. Most coffees are organic by default. Organic compost is common, pruning less common. A farmer can typically have fewer than 1500 trees per hectare, and one tree typically produces a quantity of cherries equal to less than 100 – 200 grams of green coffee.

Farmers deliver a mix of local improved varieties like Certo and local Wolisho, plus native forest varieties that have been transferred to family smallholder plots. The varieties are referred to collectively as Ethiopian Heirloom, which is a myriad of local native Typica hybrids, plus new and improved varieties based on the old strains.

Coffee cherries are harvested by family members, then hand-sorted to remove unripes and overripe cherries before they are delivered to the washing station for processing.

The cherries are pulped by a traditional Agaarde Discpulper. Skin and fruit pulp are removed before the machine grades the parchment in water as 1st or 2nd quality, determined by density.

The parchment is fermented in water for 36-72 hours. Fermentation is slower at higher altitudes as temperatures are generally lower.

Washing and grading in channels

Coffees are washed in channels, and graded in water by density. The lower density (lower quality) will float and are removed, leaving only the denser and therefore higher quality beans which are separated as higher grade lots.

Parchment is then soaked in tanks in clean water for 6-12 hours before it is moved to the drying tables.

Parchment is dried on raised beds in the sun for 12 – 15 days. The time depends on the thickness of the layers and temperatures. For the premium grades they will continuously sort the parchment at the drying tables. Coffees are piled up and covered in shade nets or plastic during the hottest hours of the day and overnight.

Coffee cherries are harvested by family members, then hand-sorted to remove unripe and overripe cherries before they are delivered to the washing station for processing.

When producing naturals the level of fermentation will be determined by the thickness and layer during the first days of drying in combination with temperature. Fermentation is slower at higher altitudes as temperatures are generally lower.

The cherries are dried in a relatively thin layer at about 3-4 cm the first days. They will build up the layers to 6-10 cm after a few days. The coffees are moved frequently and they will be covered during the hottest hours of the day to protect the cherries from intense sunlight, then again at night to protect against humidity. This will also help improve quality as the coffee is rested and the drying more homogeneous. Drying naturals at these altitudes can take up to 20 days.

Warehousing at the washing station

After drying the coffees will be packed in jute bags and stored in the local warehouse onsite, separated by process and grade. Lot sizes can vary from 100 – 300 bags. This process helps condition the coffee and achieve a more uniform humidity. They will normally be stored 1-2 months before they are moved. In some cases the parchment will be hand-sorted in the warehouse.

After the harvest season is over the coffees are moved to warehouses and dry mills in Addis. Trucking is expensive in Ethiopia. The coffee trucks must pass a local ECX checkpoint where its contents are graded and registered as an exportable product, before it continues to Addis Ababa.

The coffee will sit in parchment in a warehouse in Addis. This is when our team will go to the warehouse and collect the samples from the specific stocklots. It remains in parchment until it is contracted and the destination for shipment is confirmed.

Besides the ability to produce great coffees on a good scale, we work with Israel because he genuinely cares about the farmers. He grew up in a coffee producing area, and he shows great respect for the farmers, both as business partners and as people. 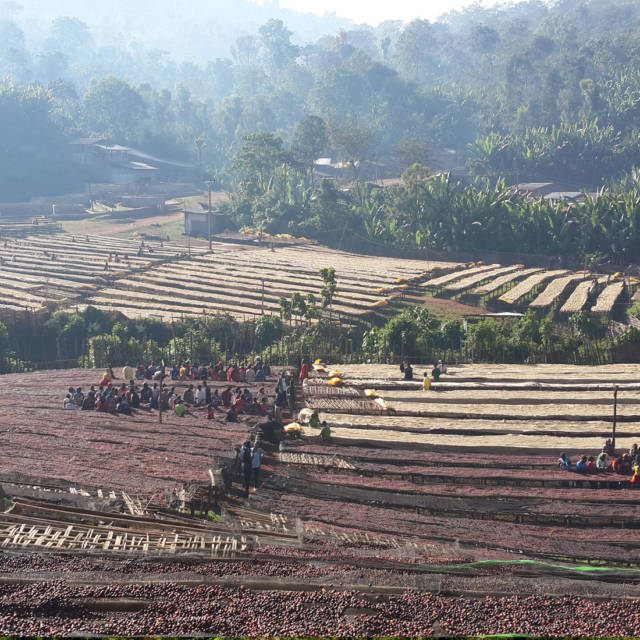